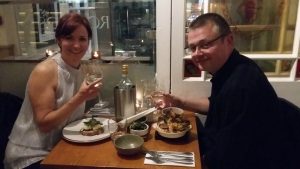 Well, I can hardly believe it, but my lovely hubby, the infamous Mr Wilmer and I have been married for 20 whole years!

It somehow feels monumental, especially since my first marriage was such a short lived disaster. I’ve learnt a lot along the way and I think the fact we laugh a lot seems to help. Even if it is because one of us (mostly me) has just done something a bit stupid.

Sure, we are very different people. I love running, he would rather swim.
He loves fish and shellfish, I would rather have a nice bowl of pasta or a cream tea.
He loves nothing more than a whole day lolloping in front of the telly and I can’t think of anything worse!
He is into star wars and I am happy to watch a girly rom com.
I love to dress up and he loves to dress down. Back in the nineties when we first got together, smart/casual on an invitation was a definately a joint affair. It still is really!

Somehow though, we seem to get along quite nicely. He is definately the gin to my tonic.

He humours me and I manage to see through his often very grumpy exteria.

I would have never got through the wilderness years, when my OCD was at it’s worst, without his incredible patience and continuous hugs. Which is no mean feat, for an increasingly impatient man.

He puts up with my faffing and often quite ridiculous moments. I in turn, mostly accept his incredible unromanticness. To be fair it makes the occasional treat of a curly wurly all the more special!

It’s the little things that count, so we have always stuck to the traditional anniversary presents that it states on the yearly list.
The year I received a giant watermelon was definately unique! I should point out that it was for the fruit/silk anniversary and to be fair, I did also get a rather fetching scarf and a big bouquet of flower’s. In fact Ian was the first man ever to send me flowers, even if he did make me a little bit paranoid, when he denied it at first.

The nice thing is that even after all these years, he only has to look at me a certain way, or do his cheeky, curly lip smile and I am putty in his hands.

We both love a good walk along a beach, hand in hand. Sometimes talking, sometimes just both lost in our own thoughts, staring at the sea. I like to walk over the rocks, that way he has to hold my hand and help me as my little legs just can’t quite reach where I need to get to. (That’s my excuse and I am sticking to it.)

I also love those moments when he get’s all mischevious and dares to try to tickle my feet, or makes me jump, or generally acts so stupidly that I am crying with laughter and begging him to stop!

Sure we’ve had our ups and downs. The times that have threatened to tear us apart. Somehow we have managed to have a much needed talk and got through the other side, sometimes quickly, sometimes with a lot of patience and care.

All I know is, he is still my Mr Wonderful and I couldn’t be prouder that we have made it this far and our adventures together still have plenty of room to grow into the dreams we’ve always shared.

Thanks for allowing me a bit of a mush fest and whatever stage you are in with your own relationship, just remember the most important thing is to be nice to each other.

Well here we are, another beautiful day in sunny Santorini. Yesterday felt a little busier, yet still incredibly chilled. So much so, that I nearly fell asleep whilst watching football, in Kelly’s Bar. That would have just been rude, so I took myself off for a walk and a little bit of retail therapy. I…

I have to be honest, I really didn’t fancy my run this morning. I was tired, I’d been on an early shift all week, so had less sleep, my Fitbit was impressed with my many, many steps just from a normal day at work and as my oh so lovely (yet honest) hubby pointed out,…

This has certainly been a week of new experiences! It all started with a fantastic opportunity to sing and record at the famous Abbey Road studios. Yes the very studios where the Beatles recorded so many of their legendary songs that still live on today! Singing Hey Jude (in the famous studio they used) as…

I am thrilled to be bringing back group coaching in a new exciting way! Years ago, I used to run a local coaching group called Butterfly club. We met once a month in a local living room and I loved sharing my love of coaching with a small group of like minded people. It was…

Well I am finally getting back into the swing of things, encouraged all the way by my amazing Fitbit. To say I love it is an understatement. It’s everything I hoped it would be and more. In fact its managed to perform a slight personal miracle! I’ll be honest I’ve always struggled to get excited…

So I promise I am still here in the land of the living… I bet you thought I had fallen off the planet with my lack of blogging! I am so sorry to have neglected you but my current goal, mission, crazy passion has well and truly taken over…… This running a marathon malarkey…