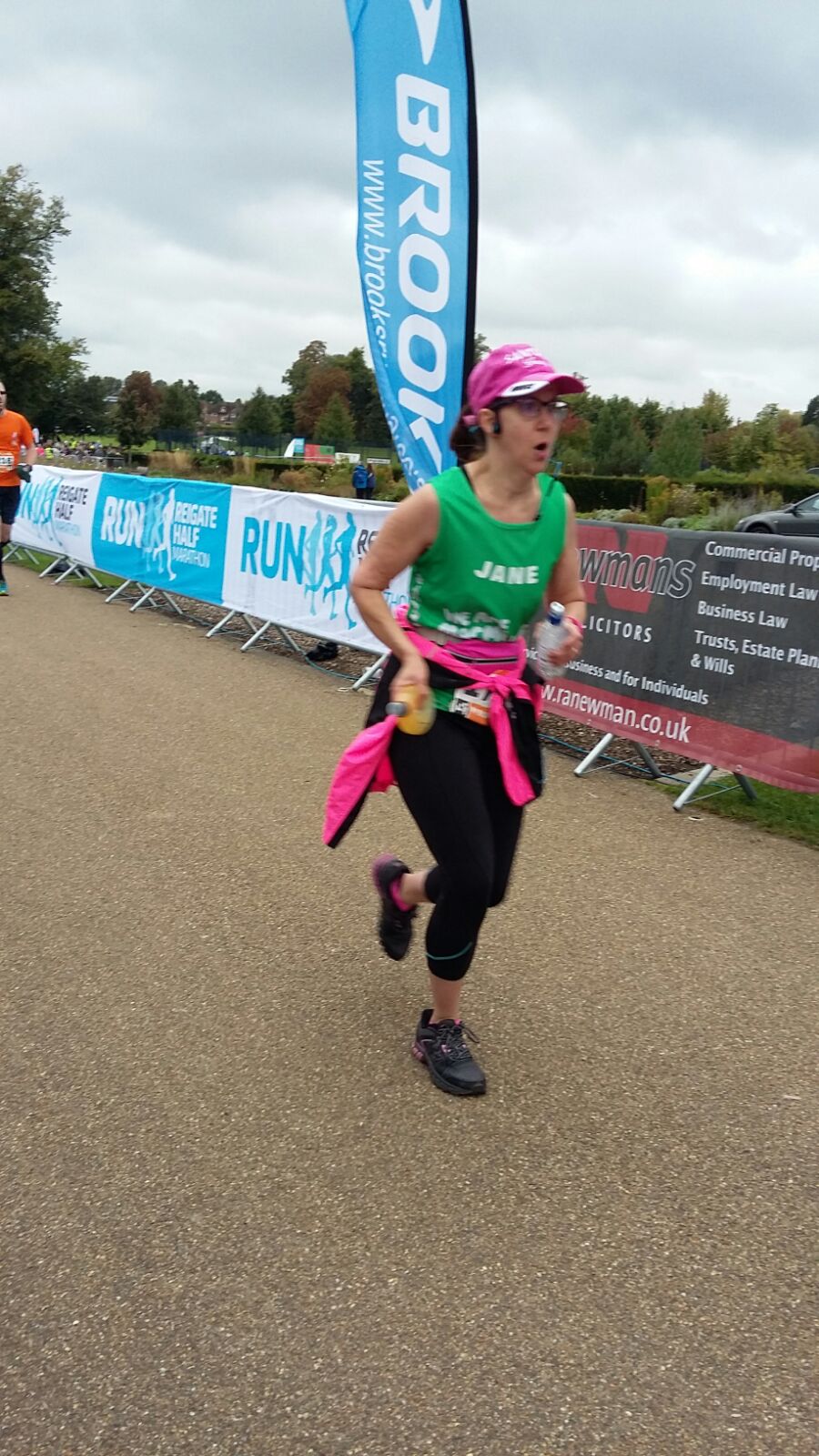 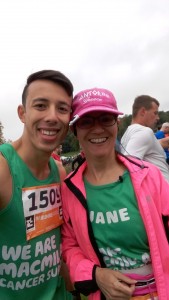 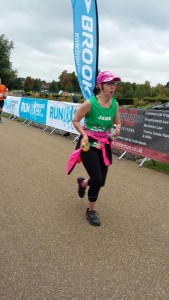 Firstly my apologies for my distinct lack of blogging of late. I’ve been so busy running, I have barely had time to do anything else!

I am finally managing to address the balance, although I seem to have got a bit carried away with the resting part and instead of going home from work promptly to don the lycra and pound the streets once more, I found myself in a coffee shop enjoying and impromptu cup of earl grey with a lovely slice of carrot and walnut cake lol!

Anyway I thought I would share with you my recent Reigate Half Marathon which was incredible. Even though I previously ran the Brighton Marathon this was my first proper half. To say I enjoyed it is a massive understatement and of course as this was me, there were a few funny moments. I’ve also discovered I am strangely competitive and although I have tiny little legs they serve me well!

So as well as training religiously for the last 12 weeks, I was busy raising funds and awareness for Macmillan. I’ll be honest it felt a bit weird as I usually run for Mind but as it’s the chosen charity for Boots and I have somehow managed to inspire some of my colleagues to get out there and run it seemed like the natural choice. Also like so many of you, my life has been touched by the evil of cancer many times over and I know what a massive difference Macmillan makes to so many people.

So there I was, on a rather grey Sunday morning, my ever supportive family in tow. All kitted out in my running gear and determined to get a good time. Toby (the only other team member out of six of us who had made it through the joy of training) went on ahead as he is much younger, taller and is like a human gazelle. One minute I was firmly in spitting distance of my chosen pacers, the next minute the other runners descended like a swarm of locusts and they were merely a far off goal. I set off determined to catch them up but gave myself a realistic 3 miles to do it. I was delighted when I finally caught them only to suddenly spot a portaloo with no queue and a green sign. I whipped in quick, but of course by the time I had re-emerged those pacer flags were long gone! So the second part of the chase began and I finally managed to catch them after mile 9. My strategy of Jelly babies, Lucozade sport, 10 minute or less miles and an overwhelming determination to pass every person in front of me that was wearing bright pink seemed to be a great combination.

It was a joyous moment when I finally caught up with the pacers and I couldn’t help but tell the man that I had never chased a man so much in all my life!

I was feeling pretty damn good as I past them and still felt great as I pressed on with Christina Aguilera in my ear urging me to be stronger.

I was almost there which just over a mile to go when I remembered everyone that had done the course before mentioned hills. Yes, there had definitely been hills but nothing that I “Super Jane” couldn’t handle.

Determined to get there I pressed on, only my body decided otherwise and I started to see stars. I quickly took on some more fluids and slowed to a walk.

With perfect timing I heard a reassuring and familiar voice. “Come on Girl! Don’t waste all that effort you’ve just put in! Little steps, let your arms do the work and you will get there! It was my lovely pacers who had now caught me up and were passing me effortlessly.

So I did as they said and somehow dug deep and got up that flipping hill!

It was hilarious when they turned back to check on my progress and there I am coming over all a bit Croydon shouting I’m still ‘ere!! Not the done thing in the middle of rather posh REIGATE.

So I gathered back some energy from somewhere and sheer bloody mindedness took over and I passed them yet again. Suddenly I was on the home straight and I locked my focus on that finishing line and went for it, as my picture shows! I gave it everything I had and was truly grateful for my much needed lovely, if rather sweaty, hug with Toby. Bless him I am not sure he has quite recovered from that particular trauma!

I was quickly surrounded by my rather proud family as I showed them my medal and willed my legs to behave themselves. Euphoric, exhausted and totally chuffed to bits with myself, I tried my best to stretch out my muscles before they seized up altogether.

It was a slippery slope for my poor old legs and my biggest challenge once I was home was trying to get back off the loo seat. With nothing to hold onto to give myself some leverage I thought I might be stuck in there for days! Finally I managed to make it out after many attempts to stand up!!!

Anyway nearly two weeks on and I am ready to get back on track but no serious running until the new year. All I know is its time to run just for health and fitness with, of course, the odd bit of cake for good measure.

Whatever your own personal goals for the autumn are, just remember to have fun and of course….

As the old saying goes, a change is as good as a rest. So after my rather disapointing foray, into the dubious world of the menopause, I have decided, to make a few changes for the better. I am definately back into my runnng and so far, the Evening Primrose oil seems to be helping,…

Yesterday for some reason we were all more tired than usual. Maybe just being a Sunday makes you immediatley more lethargic. Or maybe it was the excitement and possibly alcohol from the night before. Although my own consumption is greatly reduced due to my lightweightness! The beach was far busier as the families were out…

Well hello again. I’m so sorry its been so long I bet you thought I’d dropped of the face of the earth! You’ll be pleased to know I am still going strong, I just had to stop and regroup for a bit. As well as coaching, I work part-time for a well known pharmacy and…

Well my Christmas came and went in a flurry of activity! We had eight people for Christmas Day and to stay overnight, which took some planning especially since there is a snorer amongst us and also I had to work early on Boxing day! Trust me, retail is not my best friend at this precise…

Well since my holiday trying to get back to normal has felt like a nigh on impossible task. Since the start of this week though, I’ve been on a mission to get jiggy with it and get myself back in to gear. All good coaches have coaches and I am no exception, but with my…

Welcome to my new and exciting Sassy Blog. I will be popping on my various musings and coaching tips. Keeping you informed of interesting events and generally helping you access your sassy woman!