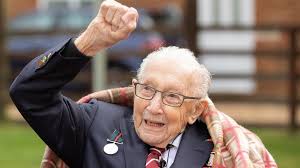 A hero of ours, has unfortunately passed away. However he is such an inspiration, that his legacy will go on for many years, in the hearts and minds of our nation. He is of course Captain Sir Tom Moore.
He was a beacon of light in a sea of uncertainty and often the wise voice of hope and positivity.
This mornings news was awash with heartfelt messages, not just of respect, but of joy of knowing such a wonderful man. His latest act of determination and courage left us all knowing we could all do better. That the world really was a better place, having him there amongst us.

I won’t lie, that man has made me cry more than a few times. Mostly happy, proud, emotional tears. Apart from today they were genuinely, sad tears for the loss of a man that raised millions for our NHS heroes, and touched the hearts of millions more. Simply by doing what he could do and pushing himself as far as possible, as we all watched on in awe. One of his greatest achievements was inspiring another little hero, in the shape of 5 year old Tony Hudgell. Tony had to have his legs amputated as a baby, due to neglect and cruelty from his birth parents. Inspired by Captain Sir Tom, he completed a 10km walk on his prosthetic legs. Before this he had no interest in walking on them at all. A massive transformation both physically and mentally, a truly amazing little boy and a testament to his lovely new parents.

I called my Dad this morning,to make sure he was okay. I’ve often called him over the past year whenever Sir captain Tom has been on the news, just to revel in delight at his latest achievement.
At 85 my Dad is a mere whipper snapper in comparison to our beloved centenarian. His goal is to get to 100 too!

I know I’ve already mentioned him in my blogs before, so it should come as no surprise to you, how much I admire my Dad. I am blessed to have such a positive role model in my life. His determination to stay safe and well, yet keeping himself occupied fixing anything that needs some patience and TLC is indeed admirable. Our latest good news is that he has given his prostate cancer a run for its money and is winning that fight hands down.

As a coach a big part of my job is to encourage people to not only find a hero in someone else but to become one themselves. Surrounding yourself with a plethora of positive, loving role models is key to you becoming the best version of yourself. Recognising and encouraging greatness in others is a sure fire way to see the world as a wonderful place. Allow yourself to be guided by the greatness of others. Aspire to be you, but with a cherry on the top and allow yourself to sparkle, because you never know whose watching. Anyway, Thank you Captain Sir Tom, I know the sky will be sparkling a little bit brighter tonight.

Have you ever had a goal that you set years ago, but for some reason it just kept slipping through your fingers? Or perhaps you had a timeline in your mind, but it came and went despite your best efforts. Sometimes, life just gets in the way! Maybe you said you were going to achieve…

Well I’ve only gone and done it, fulfilled a life long dream and have managed to sign up for the Brighton marathon on the 9th of April 2017. I am sooo excited about it, or to be more precise, a  strange a mixture of excited, proud and slightly nervous. I’ve been really pushing it lately…

I have to be honest, I really didn’t fancy my run this morning. I was tired, I’d been on an early shift all week, so had less sleep, my Fitbit was impressed with my many, many steps just from a normal day at work and as my oh so lovely (yet honest) hubby pointed out,…

As the old saying goes, a change is as good as a rest. So after my rather disapointing foray, into the dubious world of the menopause, I have decided, to make a few changes for the better. I am definately back into my runnng and so far, the Evening Primrose oil seems to be helping,…

Well I have finally taken the plunge! After a few disapointing visits to the changing rooms, I realise I have finally achieved my much sort after hour glass figure, only to have all the sand at the bottom! Now I understand this is not unusual at my age, but I was still a little concerned…

I’m sitting here, all poised and ready to run. However my phone is not quite ready due to numerous uploads on Facebook, and of course those misspent minutes spent liking all manner of things. I’ve already had my obligatory Mother’s Day lie-in, my lovely gifts of flowers, a wonderfully original card and scrapbook from Ellie….