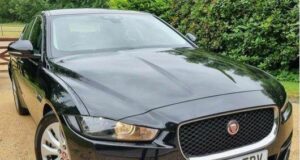 Have you ever had a goal that you set years ago, but for some reason it just kept slipping through your fingers? Or perhaps you had a timeline in your mind, but it came and went despite your best efforts.

Sometimes, life just gets in the way!

Maybe you said you were going to achieve a certain milestone or own a certain thing, i.e. a house or a particular make of car by a certain age?

We all set goals with a time in which to achieve them. It’s common practice whether it’s huge like winning gold at the next Olympics, or small like cleaning the cooker or running a mile.

Time is important. Or is it?

Ive been thinking about this a lot lately. My hubby Ian recently achieved a goal he has had for many years. Right from the time I met him, when he was a mere 21 year old, he has wanted to have a Jaguar car.
His initial goal was to have one by the time he was 30. However, he met me and gained an instant family with all that entails. Suddenly, it was much more important to have a car big enough for booster seats and shopping. When Ellie came along too, it was practicality that won every time. We were also on a very tight budget and savings were a luxury we could only dream of.

When I first met Ian he had the cutest bright yellow Ford Fiesta, that we loved driving around, with Micky in the back, singing along to his ‘Madness’ tape. I’m sure there was a line “I like driving in my car – its not quite a Jaguar!”

We’ve definitely had our share of old bangers. The worst was a Volkswagon Golf which broke down on the way to visit his Mum in Somerset. It broke down at the Wiltshire border and despite being rescued by the RAC, Ian had to drive the rest of the way in second gear which was a bit hairy let me tell you!
When we eventually got to his Mum’s, we discovered they were selling their car so we bought it off them so we had something to come home in. That was definitely good timing if you think about it!

However, that car, a Vauxhall Astra, died on the way back from visiting my Mum and Dad’s canal boat in Northamptonshire. Hmm, not a good omen for long distance visiting.

Anyway a few vastly improved cars later, Ian has finally taken possession of his much desired Jaaaag. (Said in a Jeremy Clarkson voice)

As well as being his dream car it’s surprising kind to the environment, so we pay no road Tax. Win Win!

I’ll be honest, its beautiful. It’s so smooth to ride in and our recent 6hr trip to Cornwall meant it has been well and truly tested. Everything is just that little bit better than we’ve ever had before. Even the SAT NAV is super polite and says ‘Please’ before every instruction.

My point is, he finally got there. Achieved a big goal that had been parked up for a while but never forgotten. It might have taken 20 years longer than first expected, as he has just turned 50, but the look on his face when he picked me up from work in it was priceless.

It’s meant so much more than if it had easily come to fruition at the age of 30. Now it’s really appreciated and when comfort and the environment is so much more important than boot space its ticking all the right boxes. I’m thrilled for him I really am. He works so hard and has wanted it for so long.

So next time you miss a time frame, or find yourself parking up (a very relevant coaching term) an important goal or dream, take heart. It’s just a delay.
Hang on there, its still coming your way just don’t give up on it just yet!

If you need any assistance giving your goal a bit of acceleration, give me a shout. I’m available every Monday and most Tuesdays and Wednesdays and I would love to enable you to have the confidence to go for whatever you want in life.

Decisions, decisions…. To say we find it difficult to make decisions on holiday is an understatement to say the least. We have a little daily routine that involves breakfast, beach, suncream; Chill out/blog/read/have a little sleep, swim in the sea; Change for lunch, decide where to go, eat and drink; Back to the beach, more…

Yesterday, Monday 19th July was a big day for many of us. Earmarked to many as freedom day, to others, a day with heightened anxiety. I marked the occasion with my first ‘back in the room’ session with my Rock choir buddies. It was amazing to finally, after so many months apart, hear other people’s…

I’ve had a wonderfully productive, yet restful week. Had the week off from the usual retail shenanigans and been at home getting organised, spending time with family and friends and saying farewell to much loved member of my team. I even went to see Muse in concert last night – all very rock chick! I…

I am happy to say I had a much better time all round this week. Work has been better, I am back on track with remembering to take my complete woman vitamins, and I am having a great time running. This weekend has been particularly good, partly because I actually had both Saturday and Sunday…

Well it’s finally here and I’m up strangely early, having some lovely quiet time before the madness begins…. I should apologise, I feel I’ve neglected you, my reader for far too long. The truth is, I have been so busy living life I definitely haven’t had time to sit and reflect – never mind write…

Yesterday for some reason we were all more tired than usual. Maybe just being a Sunday makes you immediatley more lethargic. Or maybe it was the excitement and possibly alcohol from the night before. Although my own consumption is greatly reduced due to my lightweightness! The beach was far busier as the families were out…